Background: The opioid receptor μ-1 (OPRM1) has become one of the most studied genes in pharmacogenetics, as this gene encodes the μ-opioid receptor (MOR), which plays a role in opioid drugs response, as well as in various disorders. One of its variants, A118G, which is found at a high frequency in the Asian population, has been associated with loss of sensitivity to and an increased requirement for analgesics in the treatment of pain, increased pain sensitivity, various types of substance dependencies, and the development of breast cancer. However, there are still limited reports about this gene polymorphism in the Indonesian population.

Objective: The study aimed to determine the allele frequencies of the OPRM1 A118G polymorphism among the Indonesian population.

Method: A cross-sectional study of 158 subjects, comprising 79 males and 79 females, was conducted among Indonesians, and genotype analysis was carried out by a modified allele-specific Polymerase Chain Reaction (PCR) method.

Results: A frequency of 60.4% was found for the G allele among Indonesian samples, with a higher frequency being present in males (66.5%). The A allele was found at frequencies of 33.5% and 45.6% in males and females, respectively. A significant difference in allele frequency was found between males and females (p = 0.029, OR = 1.659, 95% CI [1.052–2.614]), while there was no significant difference in genotype frequencies between groups.

Conclusion: A high prevalence of the OPRM1 A118G polymorphism was found in the Indonesian population, with the G allele frequency tending to be higher in males. 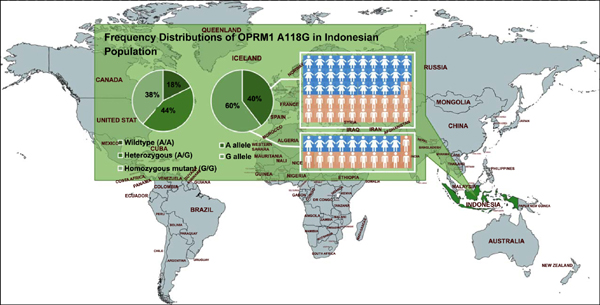